| All Blog News|Intro to Hand Drums

Welcome to our new blog space. I'm going to be write articles about drumming, drums and playing technique. Future articles will feature new images and video as well to help you get started. This first article is an introduction to hand drums, giving an overview of some different types of hand drums that are available today. 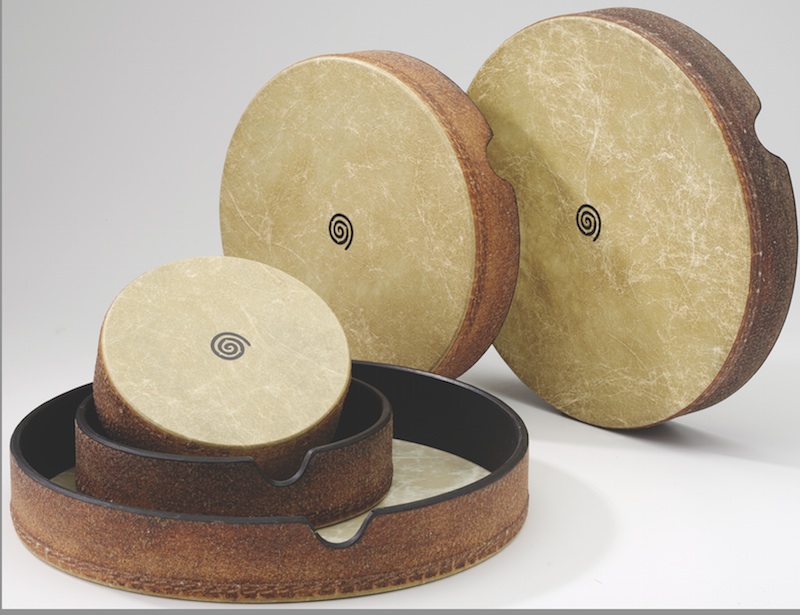 Frame Drums are probably the most common type of drum on the planet. Their origin dates back thousands of years and they have been created by literally every culture. The basic design of a frame drum is large circular frame made from wood, which has a relatively narrow depth behind a head that is stretched over the frame. Traditional heads are goat or calf skin, though other materials can be used. Modern frame drums substitute synthetic materials for both the head and the frame which give the drum more weather tolerance and tuning stability. Depending on the culture the frame may include one or more cross members, the head can be tuned loose or tight, and a variety of different elements can be attached to the frame against the back of the head to create effects. Some frame drums are played with a beater or other mallet, but most are played with the hands. The type of frame drum I'll be teaching in future videos is call a "Tar" and is the middle eastern frame drum. I'll also demonstrate a version which includes zils (cymbals) similar to a tambourine, which is called a Riq.

Goblet Drums and probably the next most common shape of hand drums. This category includes drums from many regions, but is especially prevalent throughout the middle east and Africa. The two prime examples of goblet drums we feature are the doumbek and the djembe. These two drums both share a common ancestry, but over time have evolved two different playing styles and sounds. The Djembe is a common drum in africa drum ensembles, it is the lead drum, but is quite bass heavy compared with the doumbek and thus is often used to fill roles other than the lead as well, however in african circles dunun or junjung (played with sticks) fill out the low-end. In middle eastern ensembles the lead drum is the doumbek, which is played sitting sideways on the lap with the left and right hand filling different rolls. Both of these drums have a wide number of variations depending on maker, region, construction material, and playing style.

Hand Pans are a very modern drum which were invented to have a sound similar to steel pan drums from Trinidad or Tobago. The first hand pan was the Hang drum, created in Switzerland. It is a beautifully tuned steel drum designed to be played with the hand. Because of expense and lack of availability a number of other makers have started making similar drums and steel tongue drums (often called Hank drums or Bell drums) which vary greatly in quality. We carry the Idiopan, which is one of the only tunable steel tongue drums on the market, which gives it great versatility over its competition.

Check back for more detailed information on how to play these different types of drums, how they sound, how to play turkish split finger style, how to returne your idiopan drum, and much, much more.... coming soon.